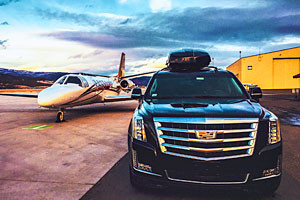 Travel knowing you are in a professionally driven, new model vehicle backed by a business that takes pride in our unparalleled passenger care and commitment to satisfaction.

Celerity Limo is your full service ground transportation solution. We provide our clients with clean, luxurious, private rides to and from the Telluride area or wherever.

Private aircraft service which allows you to communicate directly with the pilot to make your trip perfect.

Flights to Telluride in chartered aircraft.

Private shuttle and transportation services located in Moab, Utah. Service to all towns and locations within 500 miles of Moab based on reservations and availability.

Telluride's airport recently underwent several renovation projects, and with airlines from across the country flying directly into the region, access to the San Juan Mountains has never been easier.

The Montrose Regional Airport has additional flights and more dependable conditions then Telluride’s airport, but is a few hours away and rides to the mountains can be pricey.

Grand Junction Regional Airport is Western Colorado’s largest airport, and its mild winters and first-class services make it a reliable access point to the San Juan Mountains and beyond.

The Colorado Springs Airport is the second busiest airport in Colorado, and is a convenient alternative to Denver if you’re looking to visit other areas on the way to Telluride.

Denver International Airport is the transportation hub of the Rocky Mountain region, and has flights to and from Telluride and the rest of the world.